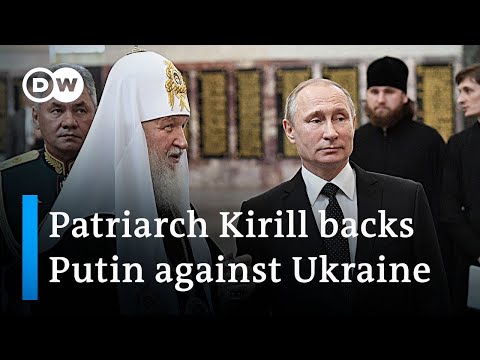 Russian Patriarch Kirill, a close ally of President Vladimir Putin, has spoken of Russia’s opponents as ‘evil forces,’ portraying Ukraine as a nation succumbing to ‘sinful Western practices,’ such as gay pride parades. The church’s close ties to the Kremlin have been essential to getting the public to rally behind the war effort, says DW’s religious affairs analyst Martin Gak.

Meanwhile, in Ukraine, some 30 million orthodox Christians are split between a self-governing church and the Ukrainian Orthodox Church which is part of the Moscow Patriarchate. But since the invasion, the rival leaders have been united in their condemnation of Russia.

Ukraine is also home to 4.5 million catholics, who are looking to the head of their church to wage peace. A Vatican official has said Pope Francis would be willing to facilitate dialogue in the Ukraine conflict. But while the pontiff has called it a ‘war which sows death, destruction and misery’ – he has neither named Vladimir Putin as the aggressor, nor appealed to Kirill to intervene on the side of peace.

Conflict, politics and ideology: Why Turkey is standing in the way of Sweden and Finland’s NATO bids

Inauguration day in the United States of America, President-elect Joe Biden to be sworn-in | U.S.